Holly Keasey’s fourth post to ecoartscotland, as part of her participation in the Santa Fe Art Institute’s Water Rights residency, focuses on different ways of experiencing and thinking about the Santa Fe River (such as it is).

A friend this week set me a challenge to write a detailed, more phenomenological, observation of a small patch of land or waterway. I had planned to go to Otowi Bridge twenty-five miles North, an important crossing point of the Rio Grande. It is a site where the measurement is taken that decides the allocation of waters from the Rio Grande to the settlements downstream in New Mexico, to the Elephant Butte Reservoirs and across the borders into Mexico and Texas. However, the hours and/or energy required to make that trip by bike during daylight hours hasn’t yet materialised.

Instead, a group of us walked a nearby section of the Santa Fe River – not walking along the banks as is normal, but instead walking the path of the river where water should, but does not flow. My gut response to this walk was that the Santa Fe River, at this point of its course, does not completely exist, at least in physical form. The beach-like riverbed missing the saturation of water; the crumpling banks reinforced by dumped rusting Mustangs; and the deposits of rocks still too large to slip into my pockets, tell tales of the river and its occasional re-appearance during times of heavy rain and snow melt, but them by themselves cannot be the river. 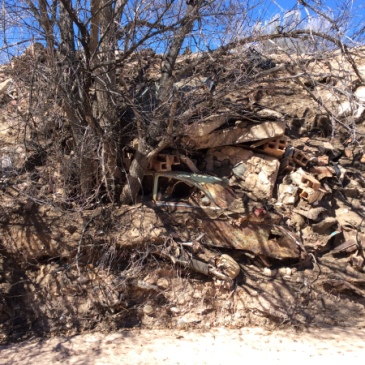 I could describe to you further the phenomenon of this dehydrated river channel – a soily skin that flakes similar to ours when lacking moisture. Its overwhelming stillness, a tiredness teetering on the edge of death. The glimmers of hopes that come from underfoot as the surface of the bed hardens with saturation and walking becomes easier. Or I could delve into the questions such experiences makes me ponder about when is a river still a river – are the bed and banks enough to constitute being a river on their own? Or is the water, and the ecosystem it brings life to, essential to our understanding of a river? Is the river actually still complete given the potential of a continuation of even the smallest movement of water underfoot? Or is there a spirit to the river, an existential presence of its own?

But if so, all I can hear is it’s frustrated scream of desperation to stop sharing an enchantment with its starved physical form. 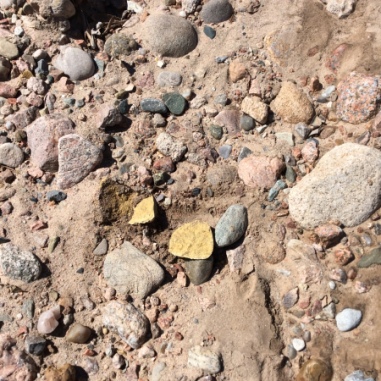 During our walk, I came across a yellow-cake like rock. Having spent my previous day reading about the uranium industry and the history of the Manhattan Project, curiosity got the better of me as I examined the rock to see if it was uranium before remembering, ‘What if it is uranium!’ and quickly releasing its yellow mass back to the riverbed. This small act of entitlement followed by fear, reflects what currently resides and flows along this riverbed, in the place of physical water: a river that can be perceived through its giving location and specificity to the many direct and indirect actions, fuelled by fear and/or entitlement, that have led to its own dehydration and questionable status as a river.

Another way of thinking through this is via a brief consideration of site.

Many consider ‘site’ as a noun, as an identified area where something resides or is constructed. ‘Site’ as a noun can be both physical, such as the ‘site’ of the first atomic bomb explosion occurred at the Trinity Site in Southern New Mexico, and conceptual, as the Trinity Site marks the site of change in the global psyche, shadowed by a new fear. Yet, what is potentially more relevant to how the Santa Fe River can be perceived is the consideration of site as a verb, the action of giving location to something. In the context of complexity, of ‘everything connected to everything else’, it is useful to ‘give location’ to complexity, to understand the Santa Fe River as the location of small and large acts of entitlement and fear.

Such acts of entitlement and fear, which have resulted in the current state of the Santa Fe River, can be traced back to the introduction of US legislation regarding property rights and the liberty of the individual, shifting the uses of the land and perceived entitlements to water, damming upstream and leaving no water for the river to physically continue along its way. And then drawn forward through the development of the atomic bomb in the fear of communism, to previous and continued contamination of waters from mining and the consequent and on-going environmental genocide of many native communities.

These relational socio-economic situations constitute the collective phenomena that, for me at least, is the current river. The westernised entitlement to resources is so great that we have absorbed the river physically and perceptually, ignoring all rights held by the river to be a river.

The use of emotive notions, fear and entitlement in the case of Santa Fe, to conduct a scalar approach through personal, social and environmental issues is more typical to how I perceive and work with water. Through focusing on fear and entitlement I am able to perceive the Santa Fe River, not only through its lack of water, but as an act of giving location to complexity.