Flamingoes on the Ras Al Khor wetlands with Dubai’s skyline in the background. Photo: Adriana Ford

For World Wetlands Day, Adriana Ford reports on the WetlandLIFEproject’s side event at the Ramsar Convention on Wetlands in Dubai and how it was received. Highlighting the various contributions (on the Community Voice Method and by two of the artists Victoria Leslie and Kerry Morrison), Adriana goes on to report on the responses from the audience (who ‘got’ what the arts and cultural value focused approaches had to offer).

If you were to ask any wetland expert what is the conference to attend for connecting to global wetlands networks, it will most likely be the Ramsar Convention COP (Conference of Parties). It’s like the wetlands version of the UN Climate Change Conference which happens each year (typically making the news), as delegates from governments and other organisations from across the world gather to discuss and make decisions on the issues facing wetlands. The Ramsar Convention on Wetlands may not be quite as well-known, but it is the oldest of all the modern global intergovernmental environmental agreements, adopted in 1971 in the Iranian city of Ramsar (coming into force in 1975), with an impressive 170 Contracting Parties.

The Ramsar Convention states its mission as,

“the conservation and wise use of all wetlands through local and national actions and international cooperation, as a contribution towards achieving sustainable development throughout the world.”

It provides a framework for wetland management and protection at a global to local scale, including the designation of protected “Ramsar sites”. Every three years, the COP – the decision-making body made up of the governments that are the Contracting Parties to the Convention – meets in a different country, to assess progress and to make decisions about how to improve the processes and implementation of the Convention. The most recent COP (COP13) met in Dubai in the United Arab Emirates, from 21st-29th October 2018.

It’s the first time I’ve been to a COP, but for a long while I’ve been curious about how they work and what’s involved. What I did know was that the Ramsar COP13 offered a unique and significant opportunity for WetlandLIFE to internationalise our impact and to make important new connections.  WetlandLIFE is a three year multi-institutional research project funded by the Valuing Nature Programme, exploring narratives and values around wetlands, particularly from a health and wellbeing perspective, and also the role of mosquitoes within this. Our research is focused in England, but our interdisciplinary approaches and findings have far broader applicability. So, I applied for a competitive place to host a “side event” at the conference. Held at lunchtimes and in the evenings of the COP, in between the plenary discussions, these side events provide an opportunity for organisations to present and discuss ideas and projects to the most relevant and global audience of wetland practitioners and experts that you could ask for. 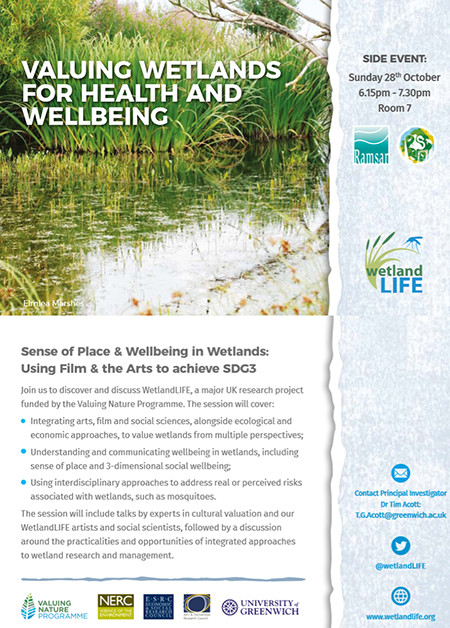 We had been allocated a 75 minute slot on the penultimate day of COP13, for our session titled, ‘Sense of Place & Wellbeing in Wetlands: Using Film and the Arts to achieve SDG3’.  After arriving a few days early to navigate the COP and attend other side events (and of course, to promote our own!), I was joined by a small team, comprised of two of our WetlandLIFE artists, Victoria Leslie and Kerry Morrison; Chris Fremantle – a researcher, artist and cultural historian and advisor to WetlandLIFE; and Dave Pritchard – a freelance environmental consultant with extensive experience of the Ramsar Convention, who is also Coordinator of the Ramsar Culture Network.

Together, our aim was to exemplify and discuss ways that the arts, humanities and social sciences can be used either individually or alongside other disciplines to work towards Sustainable Development Goal 3 – Good Health and Wellbeing – for wetlands, particularly through sharing our experiences from WetlandLIFE.  I introduced our audience to Community Voice Method, a social sciences approach which uses filmed interviews as a way of bringing together different experiences and perspectives in an engaging way. When we screen our short films in the spring, they will act as a catalyst for further discourse and deliberation on wetland values and management. Our artists also introduced their work, from poetry and creative writing, to mosquito caravans and bird hides as creative hubs, as ways to both understand and create value and connectivity around wetlands and nature.

Our session was well attended, with representation from at least 12 countries in our audience, from the Middle East, Africa, The Americas, Europe and Asia, and we were fortunate to count two members of the Ramsar Secretariat amongst them. I think it would be fair to say we were prepared to justify our approaches of using the arts, imagining our audience to be potentially sceptical about its value for practical wetland management.  The response, however, was much to the contrary.

The enthusiasm for our approaches was clear and came from all sides. Paraphrasing a few comments from the discussion,

“for many years Ramsar has tried to convince people to save wetlands based on wildlife; then they tried economic values. But this [arts and culture] works. Getting people to think about how they value wetlands is what’s needed,”

and, “Until we can translate cultural values into resolutions we are going to struggle, and this is at the core,”

and quite enthusiastically, “We need to multiply this project [WetlandLIFE] everywhere!”

What became apparent from the discussions was that far from cultural values (and approaches of tapping into those) being considered a luxury afforded only to university projects such as ours, they are recognised as having a crucial role to play in Ramsar, because despite the many successes, wetlands across the globe continue to be degraded and destroyed, and new approaches are required. The idea of tapping into the hearts of people – communities, and indeed decision-makers – through creative and visual approaches may be part of what’s needed to help protect these hugely important, but often overlooked, ecosystems.

The experiences we gained from hosting our session at the Ramsar COP has been reassuring and motivating. We are keen now to build upon this momentum, with plans to take forward the discussions this year with key organisations and networks including Defra and the Ramsar Culture Network. We will be thinking about how cultural values and approaches can be better embedded into the Convention, and from our perspective, how WetlandLIFE can contribute to this, with the hope that somehow we can make a difference on the international stage.

Dr Adriana Ford is a Research Fellow in Environmental Social Sciences at the University of Greenwich, and Coordinator of the Greenwich Maritime Centre.

Adriana works on various aspects of the human dimensions of  environmental management and conservation, including human-nature relationships, cultural values, wellbeing, and sustainable development.  She is currently working on WetlandLIFE, an interdisciplinary Valuing Nature project exploring the values of wetlands from a health and wellbeing perspective. She has also worked on projects exploring linkages between small-scale fisheries and responsible tourism, and has a broad interest in marine and coastal environments through her role in the Greenwich Maritime Centre.

Prior to Greenwich, Adriana worked as a teaching and research fellow at University of York, where she was also awarded her PhD on invasive species management in Australia. Adriana has also worked in Tanzania for a sustainable forestry initiative, and has an MSc from Imperial College London, and a BA(Hons) from the University of Cambridge.