A study afternoon of presentations and discussion on art practice and sustainability with artists Lise Autogena, Fernando Garcia-Dory and Tamás Kaszás and led by curators by Maja and Reuben Fowkes. This symposium looks at the challenges of living in ecological times and the sense in which the current political, economic and environmental predicament might also offer opportunities for a sustainable transformation of global society. How have artists sought to navigate the dilemmas of living and working in a world system that seems chronically out of touch with ecological realities and can they, through their practice and approach to the world, act as guides during times of crisis?

‘Navigating Ecological Times’ is realised through the River School and supported by the EU Culture Programme. Maja and Reuben Fowkes are art historians and curators whose interests in the field of art and ecology are manifest in their curated exhibitions, symposia and writings, which have explored key ideas and practices around green curating, environmental art history and the sustainability of contemporary art. Their work also focuses on the theory and aesthetics of East European art from the art production of the socialist era to contemporary artistic responses to the transformations brought by globalisation.

Cultura21 is a transversal, translocal network, constituted of an international level grounded in several Cultura21 organizations around the world.

Cultura21′s international network, launched in April 2007, offers the online and offline platform for exchanges and mutual learning among its members.

The activities of Cultura21 at the international level are coordinated by a team representing the different Cultura21 organizations worldwide, and currently constituted of:

– Sacha Kagan (based in Lüneburg, Germany) and Rana Öztürk (based in Berlin, Germany)
– Oleg Koefoed and Kajsa Paludan (both based in Copenhagen, Denmark)
– Hans Dieleman (based in Mexico-City, Mexico)
– Francesca Cozzolino and David Knaute (both based in Paris, France)

Cultura21 is not only an informal network. Its strength and vitality relies upon the activities of several organizations around the world which are sharing the vision and mission of Cultura21

Does the fact that an artist like Gustav Metzger, who has been creating politically agressiveaggressive works for 60 years, is so much in the spotlight at this late point in his career say anything about what we want of our artists now?

If you want a flavour of the talk,  Ridgway’s recent interview with Metzger about his appeals to artists over the years, is a vivid demonstration of how passionate he is about art’s need to involve itself in the political sphere:

You were an activist before you were an artist. Was there a particular moment, or was it through Bomberg, that you decided that contemporary politics was going to be a core part of your work?

Yes, my interest in politics was there from the age of around 17. That was in wartime, around 1942 – 43, when I was living in Leeds and there I almost completely converted to the idea of becoming some sort of revolutionary figure –art at that point had no place in my conception of the future. It was only in the late summer of 1944, when I felt I would move away from the ideal of becoming a political activist to becoming an artist. So moving into art was a way of moving forward without giving up the political interest; because I thought one could fuse the political ideal of social change with art. For example, the writing of Eric Gill who was both an artist and a craftsman and politically involved was a kind of inspiration to me. I could see this possibility of using the ideas of social change within art, with art and not simply through political, economic activity.

Sometimes we visit exhibitions together and discuss the work. On a number of occasions you have been disinterested in the work because it lacked any political bite or ethical aspect. Is this something you feel artists work must contain?

Yes, I think that is inescapable and the more the world changes, is changing, in the direction of more speed and more activities. And the more that happens the more necessary it is for people to stand back and, not merely in the art sphere but in every sphere of intellectual activity, to stand back and distance oneself and come up with alternative ways of dealing with reality than going along with a direction that is essentially catastrophic and consuming itself and turning itself into a numbers game. Where the technology, especially the technology of the mobile phones and this endless sound machinery that people force into their biological mechanism, seems to be unstoppable; and the more it goes on, the more we need to stand aside and distance ourselves from this rush towards destruction. 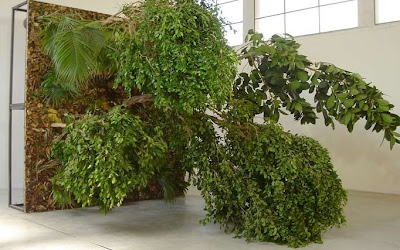 {Fallen Forest, 2006, by Henrik Håkansson, soon to be on view at the Barbican in London.}

Artists are looking at the beauty and the terror in the forces of nature through their honest and emotional portrayals, while sending urgent messages to pay attention to the ravages society inflicts on the land through war and waste. This exhibition will examine a range of art in a variety of media that addresses extreme forces of nature in two basic categories: nature-based discord, such as lightning, tornadoes, volcanoes, hurricanes, and fire; and human-caused environmental discord such as pollution, over-population, global warming, oil field fires, atomic fallout, and destruction of land. The debate about how much of nature’s wrath is the result of human impact and interference is ongoing, but questions are posed through stunning visuals about the seemingly unstoppable cycle of cause and effect.

The beauty and wonder of nature have provided inspiration for artists and architects for centuries. Since the 1960s, the increasingly evident degradation of the natural world and the effects of climate change have brought a new urgency to their responses. Radical Nature is the first exhibition to bring together key figures across different generations who have created utopian works and inspiring solutions for our ever-changing planet.