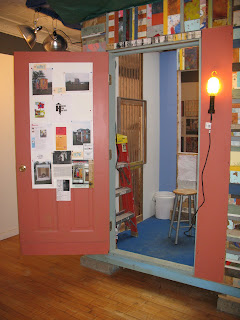 After months of discussion, planning and minor renovations, ecoartspace opened our first public space at 53 Mercer Street in Soho, NYC. We are calling the space a “project room,” which will be open to the public on Saturdays and by appointment through the end of June before switching to summer hours (to be announced).

The first exhibition in the space is by Simon Draper and the Habitat for Artists Collective, an ecoartspace sponsored project since summer 2008. (see prior blog post for more info). HFA artists include Chris Albert, Richard Bruce, Sharon L. Butler, Ryan Cronin, Simon Draper, Kathy Feighery, Marnie Hillsley, Matthew Kinney, Grace Knowlton, Michael Natiello, Sara Mussen, Steven Rossi, Todd Sargood, Matthew Slaats, Lynn Stein, Dar Williams, Grey Zeien, Donald Kimmel and Flying Swine live Theater. On display is a fully actualized 6 x 6 x 10 ft. “habitat” (shed studio space), re-created from many parts and components by various artists in the HFA Collective’s prior habitats. It is a truly recycled and collaborative effort – as all of the prior sheds were comprised of reclaimed components. The HFA project will remain on view through June before relocating to Solar One’s “City Sol Festival” at Stuyvesant Cove Park on the East River in NYC.

There were 2 separate opening events, the first was “Soho Night” on Saturday March 5th in conjunction with the Soho non-profits spaces – Apex Art, Art in General, Artist’s Space, Dia Art Foundation, The Drawing Center, Harvestworks, and Swiss Institute. All of the spaces stayed open late for an evening of extended exhibition viewing and special programs. The second official opening was on Saturday March 7th all day until 6pm. Despite the fact that the “Habitat” fills up a large central portion of the room, the space was filled with curious visitors for the entire opening. There are several other works on view including a HFA Collective wall of tiles, created by all of the artists for eventual use as shingles on another shed.

ecoartspace also has a private “front room” space where works are on view by several artists including Katie Holten, David Chow, Sara Mussen, Richard Bruce, Joy Garnett, Marnie Hillsley and Todd Sargood. The energy in the room was filled with optimism, many people were discussing the “return of Soho” as an art neighborhood, now that the recession has hit some of the high end shops are already closing – so the neighborhood could “downscale” and allow for more art spaces. This could be a good time for art making that involves artist-driven projects such as HFA, collaboration, sharing of ideas and ecologically inspired art activities – all things that ecoartspace has been promoting for the past 9 years.