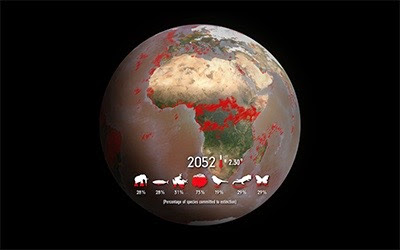 With the support of Creative Victoria and Bank Australia CLIMARTE is curating an exhibition as part of ArtCOP21, the cultural response to the COP21 UN Climate Change Conference in Paris. The artwork we have selected is an impressive video work – Counting One to Four: Nature morte by Melbourne artist Debbie Symons.

Counting One to Four: Nature morte visualises the predicted consequences of our warming atmosphere on the Earth’s biodiversity in a seven-minute video. This ground breaking work is also being screened as part of ArtCOP21 in Paris, Melbourne and New York.

By presenting Counting One to Four: Nature morte at ArtCOP21 we call on delegates and the peoples of the world to take bold and hopeful action at COP21 Paris for a safe climate and a sustainable future.