AN INTEGRATION OF PHENOMENOLOGICAL AND ECOLOGICAL AESTHETICS IN PERFORMANCE DESIGN

While much of my work these days is positioned outside of conventional theatre (in the realm of expanded scenography), my venture into sustainability began in more traditional spaces and practices. My latest academic paper: “The aesthetics of impermanence: an integration of phenomenological and ecological aesthetics in performance design” explores new ideas of aesthetics, using a design that I did for Sea Change at The Place, a contemporary dance venue in London in 2014. This post includes a moderated excerpt and summary from the recent paper. The full paper can be accessed here.

As a scenographer working across the fields of sustainability and performance design, the subject of impermanence and its impact upon environmentally responsible practice is both ubiquitous and complex. The ephemeral and specific nature of theatrical work means that most set and costume designs are only of value for the duration of the performance season—often a matter of days or weeks—before they are discarded. Even digital projection and lighting have hidden impacts that extend beyond a stage production. At first glance, the notion of designing for ephemerality while also considering a work’s extended ecological effects constitutes a certain irony—a contradiction of approaches rather than complementary perspectives that can enrich design aesthetics. However, whilst there are challenges to implementing sustainable approaches in theatre production, I propose that considering the impermanence of performance design and its aesthetic and environmental implications opens up exciting new avenues for exploration including new ways of designing for an ecological paradigm across disciplines.

In the field of the performing arts, considering the longer-term consequences of temporary design is rarely recognised as part of a scenographer’s responsibilities. Short-term decadence is generally not questioned in theatre design education, and is often encouraged if the budget allows for it. Scenographers are trained to work towards opening night. How we ‘get there’ or what happens to our sets and costumes after the production ends is often neither a priority nor a consideration. Our focus as designers have typically been to create ‘experiences of impermanence’—often extravagant spectacles with little regard for the more prevailing permanence of unwanted remains (seen and unseen) that persist long after the event.

Traditionally, scenography has primarily been preoccupied with theatre design’s immediate visual, functional or experiential effects, with little regard for much else. While I propose that considering phenomenological aesthetics is key to any successful design, the ecological urgency of the last decade also urges us to consider the long-term impacts of our work. This entails developing a concern for the ecological impact of our ephemeral designs, including an interest in the often invisible (and more permanent) causations of material entanglement of sets and costumes—across bodies, substances and environments, well beyond the theatre. This shift brings up bigger questions of how we practice—of what it means to design for both the impermanence or ‘momentary spectacle’ of the theatre experience whilst also considering the more permanent and ecological implications of such work.

In my latest academic paper, “The aesthetics of impermanence: an integration of phenomenological and ecological aesthetics in performance design”,  I cogitate how engaging with both phenomenological and ecological notions of aesthetics can provide a context for ephemeral designs that also consider a longer view of effects. For example, how might the focus of visual and temporal aesthetics in the performing arts be expanded to acknowledge and incorporate a more explicit relationship with ecological values and ethics? Can the quality and success of theatre design be measured not only by the phenomenological or aesthetic experiences it yields, but also by the environmental and social systems to which it relates and contributes to over time? To consider a design’s greater ecological integrity, it is clear that scenography requires an extended aesthetic field that encompasses environmental, social and political advocacy. 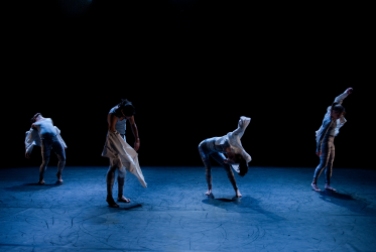 In 2014, I conducted a practice-led research project through the design and development of Sea Change – a short dance piece about climate change by choreographer Richard Osborne – as part of the Resolutions Festival in London. Examining the relationship between materiality, ephemerality, sustainability and/in performance, my aim was to explore the potential of using both phenomenological and ecological aesthetics to guide the spatial design. By synthesising ideas of phenomenological and ecological aesthetics, Sea Change demonstrated how long term environmental considerations can be brought into the ephemerality of scenographic practice and how these two modes of consideration can also bring about a more unified design outcome.

Including ecological aesthetics in theatre production and other temporary design practices requires that designers consider their co-extensive relationship with the living world beyond the experiential and ephemeral. This entails a concern for the ‘unseen’ effects of making temporary spaces and implies a kind of interaction with an ‘invisible design’ – that which may not be immediately evident in the making of the work (unrecyclable set elements, flame-retardant, spray paint and $2 shop props) but we acknowledge has causational potential to form a by-product of the ‘visible’ and ‘experienced’ (adding to landfill waste, air pollution and the production of child labour). At the same time, these ‘unseen’ consequences can also be acknowledged in a positive light, where the designer considers the evolutionary potential of a work to contribute to socio-ecological systems. This multifaceted and complex approach to performance design’s ‘aesthetics of impermanence’ remains at the crux of the sustainability challenge and will no doubt require substantial shifts in how we engage mentally as well as practically with the issue. 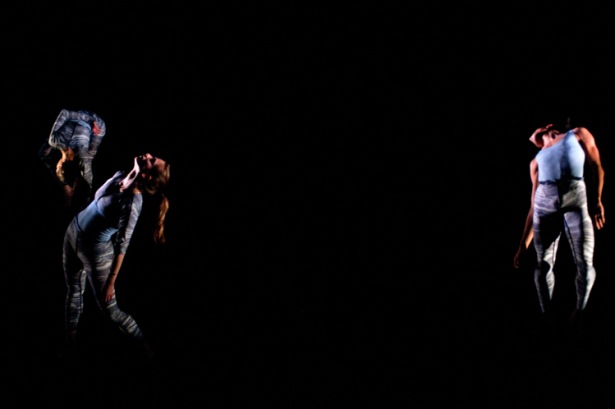 The full paper (including a summary of the learnings from Sea Change) can be viewed here.

The post, Aesthetics of Impermanence: An Integration of Phenomenological and Ecological Aesthetics in Performance Design, appeared first on Ecoscenography.

Ecoscenography.com has been instigated by designer Tanja Beer – a PhD candidate at the University of Melbourne, Australia, investigating the application of ecological design principles to theatre.

Tanja Beer is a researcher and practitioner in ecological design for performance and the creator of The Living Stage – an ecoscenographic work that combines stage design, permaculture and community engagement to create recyclable, biodegradable and edible performance spaces. Tanja has more than 15 years professional experience, including creating over 50 designs for a variety of theatre companies and festivals in Australia (Sydney Opera House, Melbourne International Arts Festival, Queensland Theatre Company, Melbourne Theatre Company, Arts Centre) and overseas (including projects in Vienna, London, Cardiff and Tokyo).

Since 2011, Tanja has been investigating sustainable practices in the theatre. International projects have included a 2011 Asialink Residency (Australia Council for the Arts) with the Tokyo Institute of Technology and a residency with the Royal Central School of Speech and Drama (London) funded by a Norman Macgeorge Scholarship from the University of Melbourne. In 2013, Tanja worked as “activist-in-residence” at Julie’s Bicycle (London), and featured her work at the 2013 World Stage Design Congress (Cardiff)

Tanja has a Masters in Stage Design (KUG, Austria), a Graduate Diploma in Performance Making (VCA, Australia) and is currently a PhD candidate at the University of Melbourne where she also teaches subjects in Design Research, Scenography and Climate Change. A passionate teacher and facilitator, Tanja has been invited as a guest lecturer and speaker at performing arts schools and events in Australia, Canada, the USA and UK. Her design work has been featured in The Age and The Guardian and can be viewed at www.tanjabeer.com