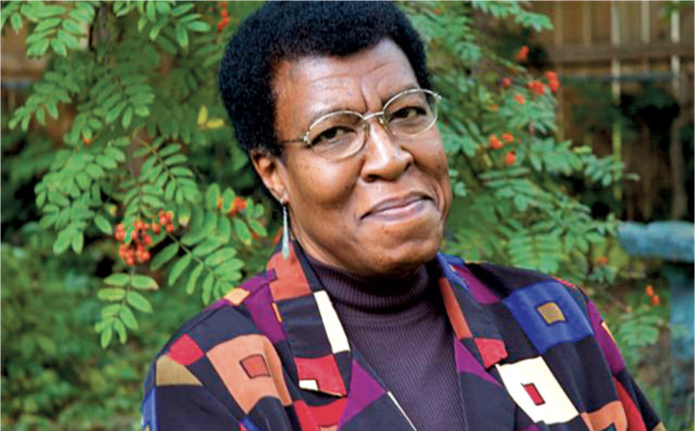 The climate crisis is intrinsically linked to environmental racism – there can be no climate justice without racial justice.

Like most of this country’s major institutions, the mainstream American environmental movement is engaging in a much-needed and long-awaited reckoning with its history of racism and white supremacy, with what Van Jones called “the unbearable whiteness of green.”

While Black American leaders have been trailblazing innovators in climate science and activism for decades, they have often gone unrecognized by white media and institutions. Furthermore, despite the disproportionately white public face of the environmental movement, Black and Latinx Americans are far more concerned about the climate crisis than their white counterparts, and are much more likely to express willingness to take action on climate.

This imbalance in mainstream recognition for Black leaders in the climate movement also extends to Black American artists and storytellers engaging with the climate crisis. Across nearly every imaginable form and medium, Black artists are making remarkable work on climate, environmental destruction, and the sociopolitical consequences of global warming.

However, taking the many lists of American visual artists working on climate as a representative example, it is clear that Black artists are dramatically underrepresented in popular accountings of climate art (Artists & Climate Change is by no means exempt – the artists featured and profiled on this website have heretofore been predominantly white). On the four lists hyperlinked in the preceding sentence, each of which features between five and twelve artists, only one African American artist – the photographer, sculptor, and performance and installation artist Allison Janae Hamilton– is mentioned (though she appears on two of the lists). There is no mention of Torkwase Dyson or Tavares Strachan, to name just two prominent US-based Black visual artists who work on climate. The Wikipedia article on “climate change art” does not mention a single Black artist.

Greater representation of the many Black artists and storytellers who engage with these topics is not only an essential corrective to the white-washed public image of climate art, it is also necessary for the success of any movement for climate justice: if we are to act in time, we must center the voices of those who are already facing the worst impacts of the crisis. In the words of Ayana Elizabeth Johnson, “whether it’s Hurricane Katrina or air pollution, storms and exposure to toxins cause much greater harm to communities of color.” And if we are to act in a manner that protects the communities most vulnerable to global warming, we must prioritize the work of artists who come from those communities.

“We need more artists in climate, and I think it’s important for people who care about climate to be committed to telling intersectional stories. Unfortunately, we have too many white spokespeople – when people think about artists engaged in climate, they think of Leonardo DiCaprio. We need to move away from white men holding this narrative and instead help inspire communities of color. And that’s going to be through storytelling; through telling a different kind of story around climate that really speaks to a lived experience that is not just a white one.”

Favianna Rodriguez of the Center for Cultural Power,
quoted in Grist

Centering the work of Black artists on climate will mean featuring artists who are well known for their engagement with these issues, as well as those who are too rarely recognized for their work on climate. It will also mean including both artists who engage with the climate crisis directly, and those who create work that speaks more obliquely to the crisis, perhaps focusing on environmental racism, Afrofuturism, or the relationship between the human and more-than-human.

Prominent Black musicians have led the way in bringing the climate crisis into popular music: the multi-talented actor-director-musician Donald Glover, for example, released the best climate song since Marvin Gaye’s “Mercy, Mercy Me (The Ecology)”(way back in 1971) when he dropped “Feels Like Summer” in the summer of 2018 under his musical stage name Childish Gambino. With over 180 million views on YouTube and nearly 140 million streams on Spotify, it might be one of the farthest-reaching pieces of climate art ever. Other Black musicians have devoted their entire careers to environmental activism, such as the rapper DJ Cavem Moetavation, who coined the term “EcoHipHop” in 2007. DJ Cavem includes kale, arugula, and beet seed packs with each purchase of his album BIOMIMICZ to educate and inspire under-resourced BIPOC communities to grow their own organic, sustainable food.

Among the widely-acclaimed Black artists too-rarely mentioned in the climate space is the filmmaker and video artist Arthur Jafa. His 2016 video essay Love Is The Message, The Message Is Death, described by the Smithsonian as a “contemporary Guernica,”appears in the collections of a who’s who of major museums, including the Metropolitan Museum of Art and the San Francisco Museum of Modern Art. Infrequently identified as a piece of climate art, the critic TJ Demos argues compellingly that Jafa’s video essay should be: “if we can describe Jafa’s video as expressing an environmentalism of sorts – which I argue we can, even though the video’s reception to date has largely evaded such an analysis – then it’s one attuned to what Christina Sharpe terms ‘antiblackness as total climate.’” Demos argues that “Love is the Message expresses potential solidarity with the oppressed and excluded, both human and non,” thus challenging what he terms the “neoliberal Anthropocene… the threat of white supremacist tendencies and colonial, extractive futurism,” a threat that, according to Demos, is represented by advocates of geoengineering as a solution to the climate crisis.

LaToya Ruby Frazier is another immensely influential Black artist who, despite widespread recognition for her work on environmental racism, is rarely in the conversation around climate art. To be sure, Frazier’s most well-known work on environmental degradation is a photo essay called Flint is Family, on the water crisis in Flint, Michigan. While the water crisis in Flint is not directly tied to climate change, it is a horrifying example of the consequences of “sacrifice zone” thinking – when corporate and government interests decide that some communities do not deserve safe and healthy environments, that their lives matter less than profits or budget savings. As Naomi Klein famously argued in her 2014 book This Changes Everything, this is precisely the kind of thinking that got us into the climate crisis: world leaders have decided that the lives of those whose homes have already been engulfed by rising seas do not matter, that the lives of those who have been forced to migrate by unbearable heat or water scarcity do not matter. The idea that some lives, some communities, some civilizations can be sacrificed before action is taken has brought us all to the climate precipice. Work like Frazier’s offers a compelling critique of this idea, among other systems that create and exacerbate the climate crisis.

There is also much to be gained from re-centering the definition of climate art around Black artists who are already part of the climate canon, such as the late, great writer Octavia Butler (pictured above). Though her disturbingly prescient 1993 science-fiction novel, Parable of the Sower, has long been recognized as a genre-defining work of climate fiction, her writing is increasingly seen as fundamental to the world of climate storytelling writ large. Somini Sengupta concluded her recent New York Times piece on the “Links Between Racism and the Environment” by describing Butler’s Earthseed series as “the one piece I go back to again and again.”

Re-defining “climate art” around such works as Jafa’s Love is the Message and Frazier’s Flint is Family, alongside Glover’s “Feels Like Summer,” Gaye’s “Mercy, Mercy Me,” and Butler’s Parable of the Sower can re-center the climate narrative on climate justice and a focus on the historical, present, and imminent harm caused by rising global temperatures. A conception of climate art that includes and prioritizes the work of Black artists and storytellers is essential to a movement for climate justice.

We are therefore thrilled to introduce a series of interviews, features, and profiles showcasing the work of some of the myriad Black artists and storytellers engaging with the climate crisis through their creative work. The series, a collaboration with Imara-rose Glymph, an eco-artist and cultural organizer interning with Artists & Climate Change this summer, will feature artists and writers working in a wide range of disciplines and media. There are, of course, an incredible array of Black artists working on climate issues globally, from John Akomfrah to Abdoulaye Diallo and beyond, but as the content of this essay might suggest, this series will focus on Black artists based in the United States (at least initially). Look for Imara-rose’s wonderful interviews as we kick off the series in the coming days.

In the meantime, explore the stunning Black Nature: Four Centuries of African American Nature Poetry, edited by Camille T. Dungy. In Imara-rose’s words, the collection “upends the traditional narrative of the Black lens on land in the Anthropocene or Plantationocene.”

(Top image: The writer Octavia Butler, in an undated photograph)

This article is part of our Black Artists & Storytellers series.

Thomas Peterson is a theatre director and researcher whose work focuses on the climate crisis. He is an Artistic Associate with The Arctic Cycle, co-organizing Climate Change Theatre Action. He recently returned from a Harvard Williams-Lodge Scholarship in Paris, where he wrote a thesis on the aesthetic of the sublime in the theatrical representation of the Anthropocene. He created Roy Loves America, a multi-form performance piece about Roy Cohn, and is developing an original adaptation of Ibsen’s The Wild Duck, set on a dying planet. His engagement in climate activism stretches back to high school, when he led a successful fossil fuel divestment campaign.